I wanted to give you a 6-months old update for my baby boy. I know that I never actually had any other updates but I only started blogging about a month ago, so I am relatively new to that.

Matthew was born at the end of June, 2 days overdue. He was born a healthy 3.75 kg via natural birth. The delivery was fast and quite easy, especially compared to the one I had with his big brother. But that is story for another blog 🙂

Straight away he was a very good eater and proceeded growing fast, much faster than his peers. My eldest son was the same, so I am guessing it’s in the genes (mix of Irish and Belarussian). Matthew is in 98 percentile for his height, weight and head circumference when compared to babies the same age.

I had to stop breastfeeding at 10-weeks, as my milk supply disappeared, but we had no problems, and he quickly switched to formula. Now at 6 months, we are in the process of weaning and he seems to enjoy food, especially root vegetable dishes. He is not very fond of peas, however, so any dish that contains those is not favored and ends up mostly all over me 😉

He is at the moment wearing 9-12 clothes and moving onto 12-18 months. I seem to be changing his wardrobe every month. Thank god I kept clothes from his brother, and I got more clothes from my sister-in-law (she has 3 boys). Together with the clothes that he got for Christmas, it is enough to dress a village:) But once he is done with his size, I donate the clothes either to charity or to our friends who are first-time parents. We are not planning on having any more kiddies, mostly due to the expense of childcare, even though we would love to have a little girl as well (through adoption or naturally). Our decision so far is to stop and wait. If my hubby can progress quickly up the ladder in his job, I might stay at home and mind the kiddies, something that I would love to do.

He is not crawling yet, but is trying to push with his legs and started to put knees under and lifting his bum 🙂 He is not standing yet, and I am not going to hurry it as he is very heavy and so do not want him to end up with bow-legs. He is nearly sitting though with a little bit of support, even though he loves launching himself backward and thinks it is hilarious when he lands on something soft. A bit of a daredevil. His elder brother didn’t sit until 8 months, but at around 10 months proceeded from sitting to crawling and standing all in 1 week.

He has been saying ba-ba-ba-ba since about 5 months, and as Baba is a grandma in Russian my Mother was chuffed:) He also said mama couple of times. That happens mostly when he is moaning, but I will take it 🙂 We have not said dada yet, just vava..

He absolutely loooves his baths, since the first time he had one. He loves kicking the water and half of his bath water ends up either on me or on the floor around us ;P

Matthew is a really happy baby, he cries only when he is tired, or hungry, or dirty. He really does not like being dirty and will let you know as soon as he did his second business (sorry for tmi).

He loves bouncing in the bouncer and playing in his baby gym. His favorite toy is an octopus from mamas and papas. 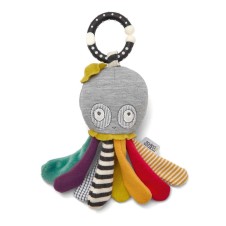 He loves chewing on his tentacles, and as Matthew is actively teething (his 2 bottom teeth are coming through, how cute is that:) ) different textures seem to help him. He also loves the noise they make.

He is definitely not a soother baby, but a blankie baby. He is content to fall asleep without any soother just as long as he has his Hare toy near his cheek. The only time he would take a soother and only or couple of seconds is when he is really tired and needs a little bit of help settling down for sleep.

He is still not sleeping through the night, but recently started waking up only once from 7 pm – 7 am. His nap pattern during the day is every three hours. He naps from 1 hour- 3 hours, depending on the day.

He is sleeping in his own room for a while now in a mamas petite cot, however, we are going to change him into a normal cot soon as this one is becoming too small.

He absolutely adores his elder brother and feeling is mutual. The two of them always smiling at each other and you can often find them playing on the floor.

He is my little smiler and I can see that he is going to have a strong personality when he is older. For now, he is content with a little bit of attention and love:)

Have a good day everyone:)