Why we love role playing …

Recently, I started noticing a trend among my mummy friends. When their kids approach them and say ‘let’s play superheroes or Doc Mcstuffins’ or any other role-playing, the answer is most likely ‘NO’. When I ask a question: ‘why not’? the answer is usually ‘He/she play this all the time and I just don’t have time or energy to play with them’.

In some ways I understand where they are coming from, sometimes if your child fixates on something non-stop, it can get very frustrated. With Alexei, we went through a stage of him being Thomas the Tank Engine, with him running around everywhere, hands by his side imitating him being a train and shouting choo-choo!. However, I never stopped him doing that and eventually, he outgrew it:) And here is why:

One of the main reasons is in this technological age, most children can be found with a tablet or a phone, having absolutely no time for anything else. However. there is one thing that the tablet cannot give them, it is IMAGINATION!!! When children are role-playing, they are using their imagination to turn ordinary items that they find around themselves into amazing things, cushions become a boat, or a line on the ground becomes train tracks…

At this moment in time, Alexei loves pretending that he is a Spider-Man and his daddy is Robin and I am a Wonder Woman (Yay:)). The role-playing can start at any point of the day. For example, recently we started chasing bad guys when we are driving from home to child minder’s house 🙂 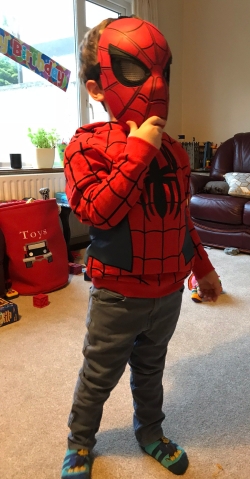 Some experts also believe that by experimenting with different roles, your children are trying to understand what each role might entail and they also might be using it to try and understand something that they are struggling to comprehend (Patty Wipfler, founder and director of Hand in Hand).

For example, when Matthew was born, I noticed that Alexei started playing a lot of games that involved saving me and Matthew from someone and also playing with his toys and taking care of them. I believe it is his protective and nurturing side coming out.

When kids get older their role-playing usually evolves (if you let them play) into more complex stories involving much more interaction, sharing and cooperation. These are also very important social skills that they will need throughout their life.

So that is why we encourage Alexei to role-play at any time that he wants.

Also for parents, it can be a very useful tool for getting your kids somewhere you need them to go or to do something that you need them to do. So for example, if we are walking in a park and Alexei gets tired of walking, but I know that he can walk for a bit more, I suggest a role-play, such as ” Spider-Man I think I see a bad guy hiding behind that tree, why don’t you go and ‘web’ him!” or if he wants to play Minecraft ‘in real life’ and I need him to put on his shoes, I might say something like ‘why don’t we build some shoes for you and then the road to bring us home’ 🙂 Alexei is quick to join in the game and it gets things done in a fun way with everyone remaining happy:)

Hope you all have a lovely day:)

How to feel better