Yesterday, my little rascal Matthew turned 7 months old. Its been 1 month since my last update and I can definitely say that Matthew became a much more active baby with a big personality:)

There were quite a lot of changes in his life, one of the major changes was that I had to go back to work and he started being looked after by people other than me. Because of this, or perhaps because of him spending more time with his cousins he has been feeling a bit under the weather for the last couple of weeks. He gets better and then catches some new strain of cold/flu and the cycle repeats itself. Still, we managed to get into a window of him feeling well and getting his last booster vaccine.

As a result of not being well, he is also not eating his solids as well as he used to.

He has his developmental check in 2 weeks but I think he will pass it with flying colours. He now says va-va, ma-ma and baba and is a little chatterbox.

We completely gave up on soothers as he doesn’t take them and thinks they are just another toy to play with. He still loves his blankie though. He is now sleeping through the night (7-7) most of the nights, however, if he doesn’t get enough solids he wakes up once for a top-up.

He is mostly in 12-18 month clothing, the vests fit him well, but the rest are a bit long, but he seems to be more comfortable in this size.

He still loves jumping in his bouncer but prefers now to sit (still has to have someone there, but has much more control over his upper body) or to roll around the floor.

Photo was taken by Babybluerascals

He discovered that he can get somewhere by rolling and sometime when you leave him for a minute to get him milk or something else, you can find him on the opposite side of the room chewing on something like… chair or his brother’s house slipper ;P 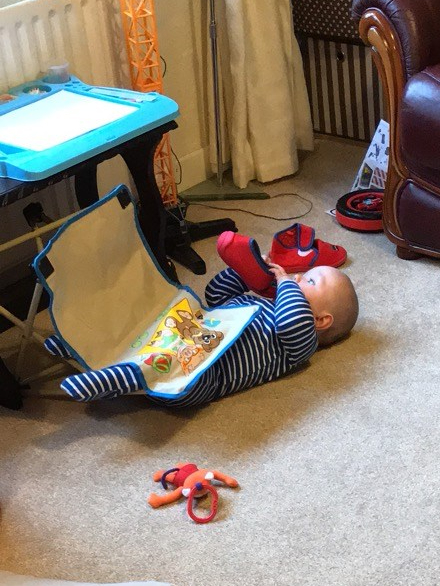 Photo was taken by babybluerascal

Matthew is also a little twister when you are trying to change his clothes or his nappy. He wants to touch everything and bring it to his mouth for a taste so it is becoming increasingly difficult to put on nappy on him or to keep him still enough to dress him. So you are most likely to end up changing him on the floor with him flipping onto his belly (see image below).

He is also starting to clearly demonstrate what he wants and what he doesn’t. Yesterday, Alexei was playing with him with a musical table. However, when Matthew would press a button, Alexei would as well and it would cancel any sounds. Well, Matthew started screaming and continued screaming until Alexei moved away, then proceeded happily playing with the table :).

He loves when people sing to him and loves when you give him kisses. Still doesn’t like strangers in the house that are trying to talk to him, but is starting to recognise his grandparents and cousins.

And one thing that he adores are balloons, any time that he sees one he gets so excited that he actually starts jumping.

He continues to idolise his big brother and always smiles at him and looks for his attention:)

Hope you are all having a great day:)

Let the challenges inspire you to find your inner strength