Today is the 29th of December, and the Christmas celebrations are well and truly finished for most. In the shops, if you were brave enough to venture out, people are re-stocking their supplies and are taking advantage of January sales. It is as busy there as it was just before Christmas. People are taking down the decorations in their houses and few have returned to work.

In our family however, it is only the middle of all of the celebrations that we do during this season. My family, consisting of Irish and Belarussians celebrate two Christmases (one on 25th of December (with Santa Clause) and one on 7th of January (according to old Russian Orthodox calendar)) and a New Year.

Because of the USSR and the lack of religion for a long time, the presents are brought by a Grandfather Frost (Ded Moroz) on the 31st of December. On Christmas (7th of January), we usually celebrate in close family by having a nice meal and enjoying each others’ company. 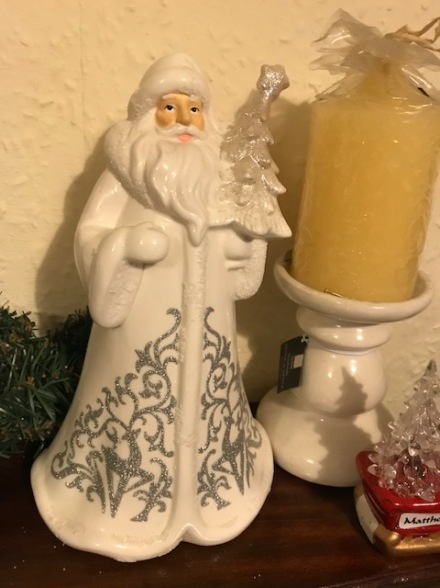 Most recently, another Santa joined our celebrations – Olentzero (from Basque region).

The story that was told to my parents, when they moved to Basque region, was that of a newborn baby boy left in the woods, and rescued by a fairy who named him Olentzero. He grew up and became charcoal burner, who was very good with his hands and carved wooden toys, and carried them in his charcoal bag to give to kids. He died, while saving some children from a burning house, but because of all the good that he has done, the fairy made him immortal. So he continued bringing toys to good children and coal to naughty ones.

My memories of New Year in Belarus were always happy ones. Not because of the presents, to tell you the truth we only ever got what we needed, not what we wanted. The presents usually consisted of clothes, notebooks for school and pens and pencils. There were also chocolates, and the ONE most important thing that was always memorable is the small of oranges and mandarins in the air. We were allowed to eat as many as we could and we couldn’t afford them any other time of the year.

After USSR broke down, we relied mostly on the fruit that could be stored in the basement of the garage, which was freezing cold in winter and so was used to store apples and potatoes. Fresh fruit were very hard to come by in the the shops, bazaar was the only place to buy them if you could afford them.

For New Year Eve, we would made a big festive table with the whole family being involved in the process. The table had a variety of dishes, most of which we still make every year. We would sit at the table enjoying the food, from about 6 pm, watching Festive concerts and movies on TV. Near mid-night, we would make our way to main plaza, where we would say hello to Grandfather Frost, watch the fireworks and enjoy the atmosphere with the rest of the people from our city. There, we might meet some of my parent’s friends and would go to their house or invite them to ours to continue the celebrations.

By the time we got back home, the presents would be magically under the tree and we would go to sleep feeling loved and happy. Next day, we would always visit our grandmother and have a New Year dinner with her and my cousins and other relative.

Now that we are grown up, every year we meet in one of the countries that we live in and have the celebration with our now expanded family. Grandfather Frost still comes to my kids bringing small presents and the air smells of oranges and we continue watching traditional Russian movies and programs with air filled with love and laughter.

Hope everyone is having a good time and is enjoying the season.