Hope you are all doing well:)

I decided that it was time for me to share my birth stories for both of my boys.

I have 2 healthy boys and an angel in the sky. My first pregnancy terminated at 14 weeks and I didn’t even get to see the little heartbeat before my angel went to heaven.

A year later, in 2013, I gave birth to Alexei. A week before his birth, I had high blood pressure, protein in urine on and vertigo, i.e. suspected pre-eclampsia. Those days were the worst of the whole pregnancy, as I couldn’t even go to the bathroom without the help of my hubby.

It was not a standard pregnancy symptom-wise. I had morning sickness, only more like daily sickness lasting all day long, from 3-6 months. The first 3 months I didn’t even feel pregnant. Then from 6-9 months the symptoms eased off but I started getting car sick, whenever I wasn’t driving. So I spent a week before he was here in the hospital. My consultant was great and took care of me, she discharged me once they got the blood pressure under control.

Once we got home, I went to have a bath as there wasn’t one in hospital  (just shower), and it helped me to get rid of any aches during pregnancy. While in a bath, I started feeling contractions, that was around 4 pm. By 10 pm we were back in hospital with contractions coming every five minutes. The mid-wife checked me, but I was only 2 cm. She then told us that we would have to go home, however, once I told her that I was only discharged from here today and had a suspected pre-eclampsia, I was admitted and proceeded having contractions until 1 pm, at which time to pain became unbearable, and they gave me a pethadine injection.

After the injection I managed to lie down, but stayed awake until 6 am, when they brought me to delivery suit. My hubby told people: ” Ah sure it was fine, she was sleeping all night before delivery…” lol.. He was snoring like a baby in the chair, while I was becoming increasingly more uncomfortable. At around 11 am, I got an epidural injection, which was the greatest invention ever:) (apparently I was very high and kept insisting that I will become a sales person of epidural, selling it to everyone). After that, I finally had an hour of sleep. They checked me at around mid-day and I was 5 cm, but within 15 minutes, I quickly progressed to 10 cm, and was ready to push. I pushed for about an hour, but Alexei was refusing to come out. Finally, with a help of a suction cup Alexei was born a healthy 3.2 kg. I had to stay in hospital for 3 days as it was weekend and the tests couldn’t be performed until Monday.

With Matthew, perhaps because he was my second baby, the delivery was easier. I had to have an induction, as I started getting high blood pressure and had a history of pre-eclampsia with Alexei. I went in to hospital at 6 am, got induced at around 7 am and moved down to waiting room for delivery. Started getting contraction and was given gas to manage the pain. Then, when they checked me at 10.45 am I was already 5 cm. My hubby told them that last time I progressed very fast to 10 cm, within 15 minutes, but they didn’t believe him.

I was in a lot of pain and kept asking even just for pethadine, however, they forgot to send my bloods and couldn’t give me anything until those were done. Without realising it I began to push, and before people say how did you not realise it? With Alexei I had an epidural so it didn’t feel the same. With Matthew I didn’t know what was going on. At around 10.55 am they asked me if I could walk to the delivery suit, I said absolutely not (or rather shook my head no!!!!). They wheeled me in there and made me climb over. The mid-wife noticed my discomfort and asked whether I was pushing, I said “I do not know, may be…” She said she would check and saw that Matthew was nearly out, and his head was showing. All she had time to say to a student-midwife was “get your gloves on” and after 2 pushes Matthew was born! My hubby of course joked that if they made me walk they would see the birth of the first bungee-jumper in the corridor ;P

After half an hour, I was on my feet, having a shower, and as everything was perfect both with Matthew and myself was discharged in 24 hours after delivery.

Even though the delivery stories are completely different, both boys are healthy and happy 🙂 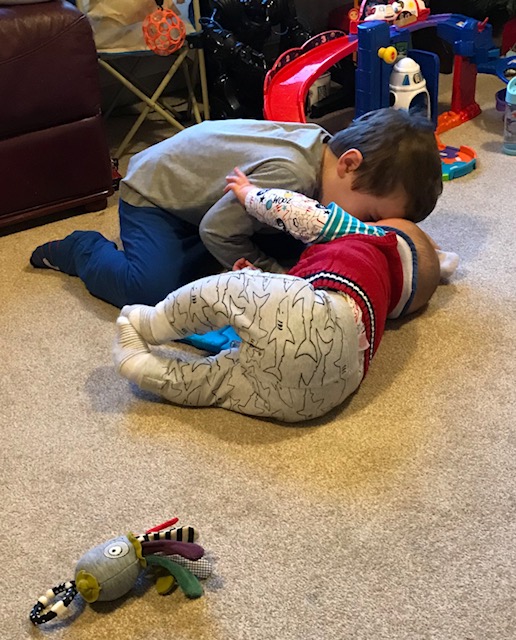 You can take your pain and turn it into your strength