Our little rascal Matthew turned one last week. Since my last update on his progress, he has progressed a lot.

The major change is that he first crawled around 10 months and now is standing and cruising the furniture. We are anticipating him walking in the next month or so.

It has been a very hot month in Ireland, unusually so. So we have been wearing shorts and t-shirts to try and cool down and we have filled our paddling pool a couple of times. We thought Matthew will need to be held and supported, but he is a complete water baby. He was crawling in the pool, splashing with Alexei and having loads of fun.

As well as wearing light clothing, the hot season means BBQs:) Matthew loves bbq chicken and burgers and is now mostly eating the same food as us, just a little bit mashed for the main meal and the rest is self-weaning, i.e. finger food that he eats himself.

He wants to eat exactly what you are having, preferably from your plate ;P If you are having the snack in the room and he is in it, he will crawl to you really fast and without any ceremony will start eating from your plate. If you do not want to share, you will get a grunt with his little hands trying to get at your food and will persist until you relent. We do not really mind, as it gets him to try a variety of foods.

Apart from the food he really loves chewing on paper and plastic, which his brother generously provides for his pleasure ;P So we are constantly fishing it out of his mouth.

He is off formula completely now and we stopped sterilising the bottles. He has no problem with cows milk and as a result is much more ready to eat any other food and drink water when he is thirsty.

If he is finished eating or doesn’t like something he will throw it down or place it back on your plate. During dinners, we have our meal at dining room table and he now sits like a big boy with us at the table in a booster chair. He loves reaching for everything and generally making a complete mess:)

He really loves any toys that can make music and will do a very cute dance and a massive smile to me at any time he manages to turn the music on 🙂 He is getting quite good at putting shapes into toys and walking while holding my hands. And… he is starting to climb the stairs…………. As our staircase does not allow of the baby gate, we are constantly taking him off the stairs and he considers it as his personal challenge to get to the stairs without us seeing him and has great fun racing us to it.

He is going to be as stubborn as all of us, will give out if he doesn’t like something and has a mini temper tantrum already ;P

He is a bit clumsy yet on his feet and as a result, ends up falling a lot and banging his head against things… Yesterday he fell and hit the corner of the door and has a massive bruise on his forehead and a busted lip. They thankfully heal very fast.

He is a big and tall baby for his age. He wears 18-24 month clothing and his head size is about 100% of the population of babies for that age. We were a bit worried about the head size, but he is following all the right curves, so he is just like his brother and genes are to blame for that. At least I know that he will not be bullied in school.

He absolutely loves his big brother and the two of them are forever chasing each other around the house, squealing with pleasure.

Matthew’s Birthday was a great success. It was a two-day occasion. On his actual Birthday, he was with his cousins and I brought over a small cake for all of the boys. He got to taste the cake for the first time in his life and I can say that he definitely straight away became addicted to sugar. He also waited up for daddy to come home to open his present from us which was a digger that pops balls out and plays music.

For his Birthday party, we invited the whole family from Ireland to a BBQ. We had an inflatable swimming pool filled for the boys and they had great fun messing in the water and eating all the treats they could. My hubby’s uncle was also in Ireland from UK and they also came to congratulate him. It was a lovely day and everyone really enjoyed themselves 🙂

Hope you all have a lovely day 🙂 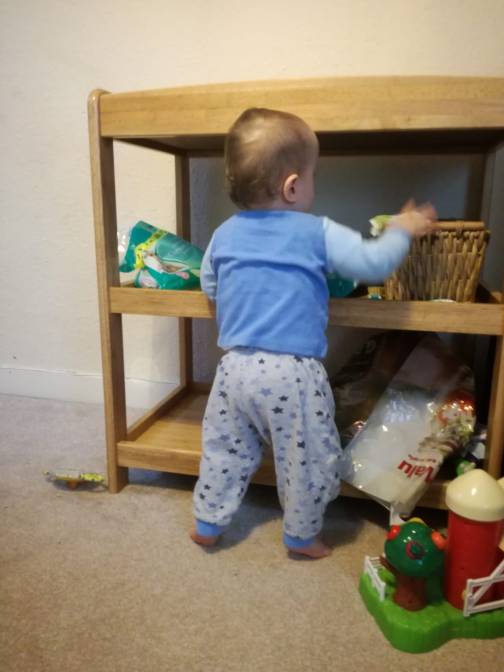 There is nothing better than having a snack on the floor. Great fun taking food out and putting it back into bowl.